Stress results in tense neck and shoulder muscles, leading to stiffness, headaches and more stress. Massage helps to relax the mind, body and spirit, providing time and space for self, and a feeling of peace, calm and well-being. It allows the nervous system to normalize itself, and may reduce many stress-related conditions, such as palpitations and raised blood pressure. Prolonged periods of stress can subconsciously affect many systems of the body. Stress has been shown to aggravate, or even cause, such conditions as heart disease, gastrointestinal disorders, memory loss and decreased immune dysfunction. Massage therapy is one of the best antidotes for stress. Massage boosts the body's immune system, which can become compromised from extended periods of stress. Tension can build up in the muscles, causing a decrease in circulation and nutrient delivery to tissues. … END_OF_DOCUMENT_TOKEN_TO_BE_REPLACED 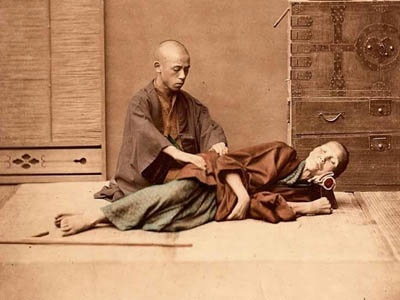 Shiatsu The Japanese Art Of Massage.

Shiatsu the Japanese art of massage. By Showanna Butler … END_OF_DOCUMENT_TOKEN_TO_BE_REPLACED

What is Shiatsu? By Andre Couture Shiatsu is a Japanese form of massage combining ancient massage (Anma), acupressure, stretching, as well as Western massage and sciences. Shiatsu was originally formed when the Chinese medial theory of acupuncture was introduced to Japan in the mid-1800s. Although it has a surprising amount of knowledge in anatomy and physiology as well as many western sciences it differs in its treatment methodology. Shiatsu follows the Chinese meridian system, which are basically the energy pathways in the body. This is done in order to restore balance to the persons whole being. The word Shiatsu means finger pressure and uses mostly fingers, palms, and thumbs although there are various forms, which incorporate other techniques. Massage and pressure are applied to various energy pathway points of the body as well as the musculoskeletal system in order to achieve physical and mental well-being. Shiatsu has been described as needle-free form acupuncture. The essence of Shiatsu is diagnosis and therapy combined since a therapist can detect irregularities, such as stiffness on the surface of the body, and to properly correct or heal these problems. Since Shiatsu is derived from Chinese medical theory it can therefore be described as holistic since it treats the whole person instead of only specific complaints. Shiatsu has a very strong reputation for reducing musculoskeletal pain as well as reducing stress and all of its many symptoms. Most people simply aren’t aware of the symptoms of stress as they include any and all kinds of pain, headaches, fatigue, sleep disorders, mood swings, sinus and allergies, digestive disorders, as well as reproductive issues. Shiatsu has been proven to eliminate these symptoms over time as well as the reversal or regression of many current problems. It has long been believed that shiatsu is believed to enhance physical vitality and emotional well-being. As we age we begin to experience muscular and skeletal pain. They are caused by several factors such as physical inactivity, overuse of muscles, poor posture, and age. These factors lead to what is known as Arthrosis, which is the hardening of soft tissue, muscles, tendons, and ligaments in the body. Shiatsu is an ideal form of massage for these kinds of problems, as they tend to not only work on the musculoskeletal problem at hand but also on the person as a whole. Although these are only a few of the many issues that shiatsu can address, the therapeutic effects can go on and on. Look again at those symptoms of stress and ask yourself how many of them you see in yourself, your friends, and your family. Like any form of therapy one session is simply not enough to address problems that took years to develop in the first place. See for yourself what Shiatsu can do for you by visiting a therapist yourself, sitting down and talking with them about what is troubling you, and feeling the benefits that so many others have already felt. … END_OF_DOCUMENT_TOKEN_TO_BE_REPLACED