What Is the MBLEx Exam? Why Is it Important?

The MBLEx (also stylized as MBLEX or Mblex) stands for the Massage & Bodywork Licensing Examination.

It is a standardized examination that tests the critical knowledge needed to practice massage therapy. The MBLEx is administered by the Federation of State Massage Therapy Boards (FSMTB), which is recognized professional organization in the US that oversees the regulation of massage therapy practice. Since the MBLEx is nationally administrated by the FSMTB, passing the exam it has become a licensing requirement in 49 states, including Florida.

In short, if you don’t pass the MBlex, you can’t legally be employed as a massage therapist in 49 states.

Because an emphasis is place on passing the MBLex, there is a lot of mystery and even fear, surrounding the exam. Without diminishing its importance, we will discuss the MBLEx in this article, in an attempt to “normalize” the exam. It’s really not as scary as you may think. : )

Because of its nation-wide importance to massage therapy, the MBLEx is often mischaracterized as being difficult to pass. However, keep in mind that you only take the MBLEx after you’ve finished your massage therapy program and that the exam only tests information that you would’ve covered already. 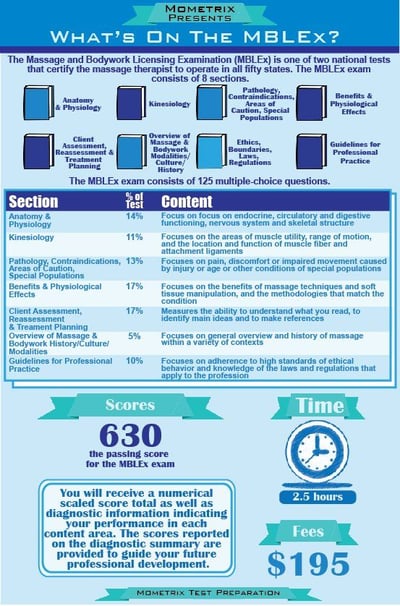 Exam Format: The MBLEx consists of 100 multiple-choice questions, to be completed in a timed, 2 hour period. It is administered on a computer at anauthorized testing center.

In other words, you will have 2 hours to complete 100 multiple choice questions on a computer.

As of July 2018, the 100 questions are approximately categorized as:

A more detailed breakdown of specific categories can be found on the FSMTB website.

Studying for the MBLEx

Now that you’ve seen the categories, you’ll notice that they align with the material you have learned at massage school. However, to maximize yourchances of success, you will still need to prepare for the MBLEx by devoting several hours of study. Luckily, FSMTB provides an official MBLEx study guide.

There other MBLEx study guides, such as Massage Buddy, which is created by MASSAGE Magazine. These study guides include copies of practice tests, which give you an opportunity to familiarize yourself with the material and format of the exam before taking the real thing. 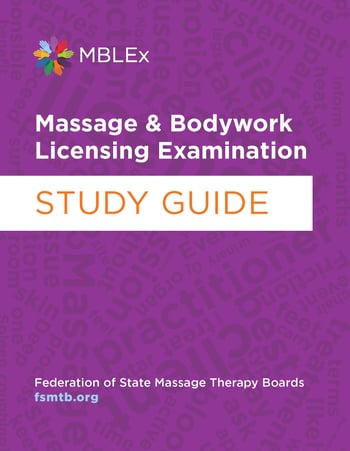 One of most important factors to look into when deciding which massage school to enroll at is the MBLEx pass rate.

The MBLEx pass rate is the percentage of students that pass the MBLEx after taking it the first-time. We emphasize choosing a massage school or program with a high MBLEx pass-rate, because passing the MBLEx is required for licensing in Florida and other states.

The MBLEx pass rate serves as a general gauge of the quality of education offered at the school. The higher the pass rate, the higher the quality of education is. It is recommend that you choose a school that has a minimum MBLex pass rate of 70%. If a school’s minimum pass rate is at least 70%, then it serves as evidence of quality program, since the larger majority of students are able to pass the exam the first time around. 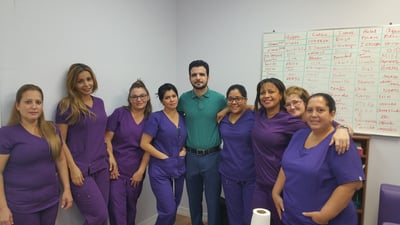 As such, if you're considering attending massage therapy school, always ask what the most recent MBLEx pass-rate is. And in case you're wondering, Acupuncture and Massage College has an 80% pass-rate average for first time test takers (2015-2017).

If you're considering attending massage school, download our free career guide below. Acupuncture and Massage College is located in Miami, Florida.