They teach what?! at acupuncture school: Yin-yang, Wu-Xing, and Qi.

If you’ve ever received an acupuncture treatment, then you may have seen a particular poster or anatomical model of the human body somewhere in the acupuncturist’s office. What is this model and how is this different than anatomical models you studied in biology class?

The model you saw is a representation of the Traditional Chinese Medical (TCM) view of the body. 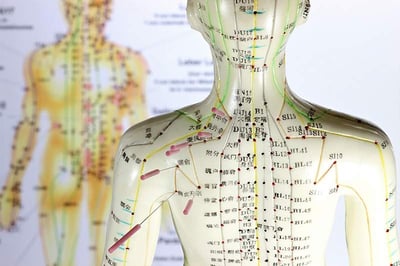 Traditional Chinese Medicine (TCM) is over 2,000 years old. As such, it is only logical that it would have used a different anatomical model than the one currently used in conventional medicine. While different models of the body have been used throughout medical history, the TCM model is especially unique because its healing modalities challenge conventional medicine's biochemical explanations of the body.

We know this, because many of the studies done on acupuncture use sham-acupuncture as a control group. Sham-acupuncture refers to medical needle-insertion at random locations points on the body to show that acupuncture's mechanisms are dependent on the Traditional Chinese Medical model of the body.

Traditional Chinese Medicine holds that the body is an interconnected system of different yin-yang properties. 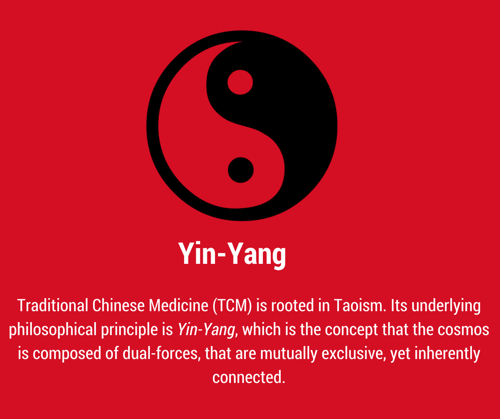 Each meridian has a yin-yang property and corresponds to a particular kind of qi. By knowing which kind of qi is needed restore balance to the body, the meridians can be mapped on a TCM model of the human body, which allows Acupuncturists to pinpoint the location where the medians correspond to the surface of the body, which is known as the acupoints. As such, manually stimulation can be applied to the acupoints to stimulate and restore the flow qi, which allows the body to heal.

While is there is a recent and growing trend of scientists and physicians who believe that acupuncture actually has Western scientific reasons for its effectiveness, the majority of current Acupuncture Physicians still utilize the traditional model and its theories and consequently, is the reason why many in the West continue to be skeptical of acupuncture. 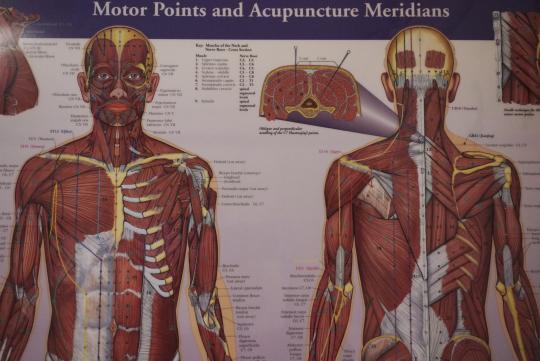 In many ways, Traditional Chinese Medicine can be summarized as a system of medicine that utilizes a Taoist-informed understanding of the body, health, illness, and healing. The major medical theories of Traditional Chinese Medicine are the Vital Substances, Zang-fu Organs, and Jing-Luo. The Taoists doctrines that the medical theories are based on are yin-yang, qi, and Wu-Xing.

The principles of Traditional Chinese Medicine are primarily rooted in two philosophical and cosmological doctrines of Taoism: Yin-yang and Wu Xing.

Yin-Yang: All is interconnected, yet separate. Permanent, yet changing.

The concept of Yin and Yang serves as the primary guideline for understanding TCM. Yin-Yang, which translates into “dark-bright,” is the metaphysical notion that all phenomena has a dual nature of two mutually opposite, yet inherently connected forces. 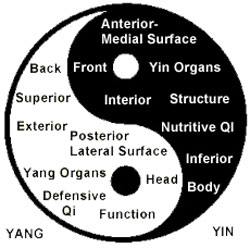 Yin-yang has four primary characteristics, which are referred to as the Four Aspects. Yin and Yang are:

In TCM, the Three Major entities all have particular yin and yang characteristics.

Yin and Yang seek a state of harmony and balance, but are always in a state of fluctuation. This fluctuation has four specific patterns, known as the Four Imbalances.

Luckily, this fluctuation is not random and follows a cyclical pattern known as Wu Xing.

Wu Xing: In Taoism, the cosmos is described as having a cyclical nature. The cycle follows a five-fold pattern of change, extremity, and balance, known as Wu Xing, which means the Five Elements or Five Phases. 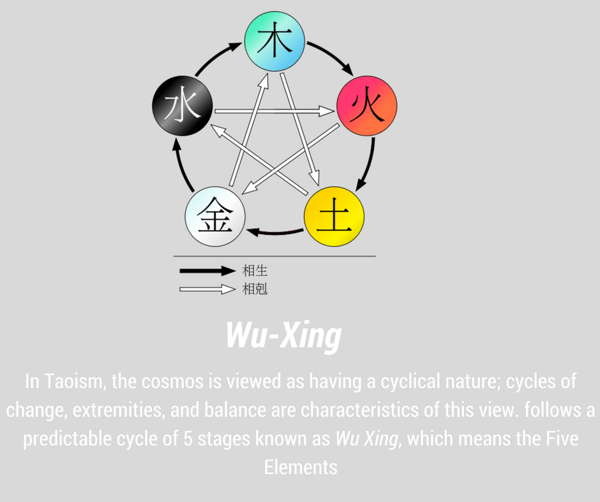 Wu-Xing or Five Elements describes the interactions and relationships between specific phenomena or phases that arise from the universe’s ongoing existence and development. The five phases are Wood, Fire, Earth, Metal, and Water. According to the classical explanation, the Wu-Xing cycle explains how the Five Elements arise via generating or overcoming. 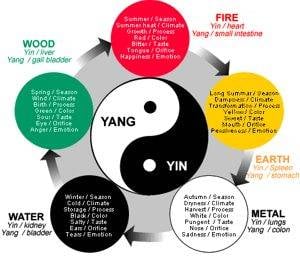 By knowing which phenomenon matches which phase, pattern recognition can be used to predict and influence the next phase of the cycle.

Taoism holds that humans are microcosms of the cosmos. As such, the human body is described as having its own Wu Xing pattern, which is known as Zang-Fu. In TCM, each of the Zang-fu organs, which produce qi, correspond to an Element. 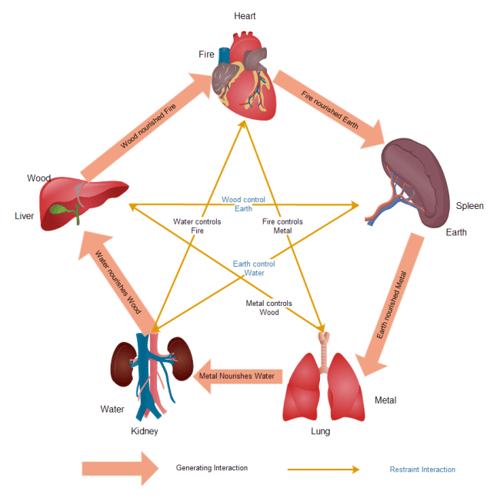 Zang (脏) refers to the five organs that are yin. Collectively, their primary purpose is to produce and store qi, xue (blood), Jinye (body fluids), Jing (essence), and shen (Spirit). They are the:

Heart: Responsible for storing shen. Physically, it governs blood and the meridians. Emotionally, it controls joy.

Spleen: The Spleen is one of the most dynamic organs. It is responsible for the transportation of essential qi and xue (blood) from nutrition and water, and actuating them to the other Zang It also helps to contain xue within the meridians. Physically, it governs the limbs. Emotionally, it controls pondering.

Lung: The primary function of the lung is the actuation of pectoral qi, which is produced by breathing. Physically, it governs the skin and hair. Emotionally, it controls grief.

Liver: The primary function of the liver is to ensure that qi can flow freely through the meridians. It also stores blood and maintains the tendons.

Qi: Vital Life Force. What does that even mean?!

Qi (chi): The Zang-fu are responsible for producing qi. Qi is the vital life force. It is the standard for understanding health in Traditional Chinese Medicine.

The concept of qi or chi has two main branches. There is the physical or nourishing portion of qi that makes up the air, fluids, water, and food that we take in. The other branch of qi is more insubstantial. It is the vital and the energy itself that flows through our bodies.

There are four kinds of qi.

Parental Qi: Our parental or yuan qi is the qi that is inherited from our parents at conception. After conception occurs, parental qi is stored in the kidneys.

Actuation: Qi is responsible for maintaining the vital life energy that is necessary for the body to grow and develop properly. This includes all the body’s functions, such as the Zang-fu organs, meridians, and Xue (Blood). If there is a qi deficiency, then the functional entities and vital substances will be negatively impacted, which can cause illness.

Warming: Qi helps produce heat and regulates body temperature for normal functions to occur. A deficiency in qi can result in a lowered body temperature, cold limbs, and a disposition to hot drinks, as means to combat this.

Defending: Qi defends the body against external elements, such as pathogens and environmental factors that can cause illness.

Containment: Qi is responsible for ensuring that the body’s organs and fluids kept in their proper places. In the case of xue, qi is responsible for regulating blood flow within the vessels and ensuring that they don’t leak out. Qi also regulates Jinye (body fluids-sweat, saliva, etc.) and makes sure that only the proper amount is allowed to leave the body. Qi deficiency can result in symptoms related to body fluids and organ problems.

Transformation: Qi is also responsible for transforming nutrition and air into different subsets of qi, such as blood.

The channels that connect the Zang-fu organs and regulate the flow of the fundamental substances throughout the body are known as Meridians or Jing-luo.

In Traditional Chinese Medicine, a meridian or Jing lou is a channel through which qi and the other fundamental substances flow. They are known by many different names, such as acupuncture meridians, acupoints, and energy vessels. 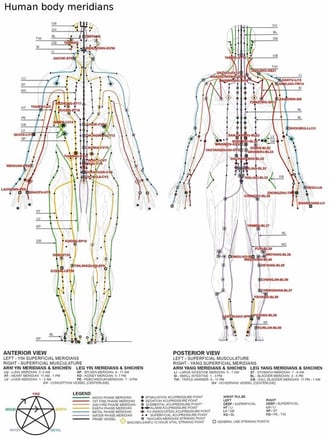 The meridians function as a network, much like a highway system, that can be mapped out throughout the entire body. They are similar to the circulatory system in western medicine, but it needs to be emphasized that meridians are non-physical.

The Twelve Major Meridians are the primary meridians through which qi flows. They are located in each arm and leg, have yin-yang properties, and are connected to a specific Zang-fu organ.

From these twelve primary meridians, several hundred other, smaller meridians branch out through the entire body.

It is the meridians that connect the Zang-fu to each other and also, to the rest of the body.

While the meridians are non-physical, they approximately correspond to specific places on the body's surface known as acupoints, which serve as physical "road map" for applying acupuncture and other Traditional Chinese Medicine (TCM) healing modalities.

The healing modalities stimulate the flow of qi , restoring the balance of yin-yang in the body.

If you've enjoyed learning about Traditional Chinese Medicine, then perhaps you should consider a career in Acupuncture and Oriental Medicine. Acupuncture and Massage College was the first acupuncture school in Florida. To learn more, download our free career guide below and learn about life as an acupuncturist.